The Fifth and Sixth Class pupils are now entering their second week of a nine week programme of “Say Yes to Languages”.  Pupils are learning some French and are already able to introduce themselves, say how they are and spell their names in the language.  A game of “Jacques a dit” (Simon says) today helped learn instructions given in the classroom in French.  Pupils in Ms Casey’s class  also had a chat and discovered that eight different languages are spoken in the homes of their class peers!  We were then taught how to say “hello” in these languages.  Great fun!

The aims of Say Yes to Languages are to:

We will keep you posted as to what Fifth and Sixth Classes learn and discover! 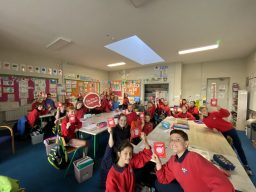